Here’s a bit of a worrying fact, something like one in six children is affected by a condition known as hypomineralisation or on a more self explanatory note, ‘chalky teeth’...where a child’s teeth are formed with less mineral, making them more prone to crumbling and having dental decay leading to loss of their adult molars and putting them on a path to years of expensive dentistry and orthodontics. As a parent its something to worry about, but more importantly something to really watch for...particularly since the condition seems to be on the increase, with a number of paediatric dentists believing its due to the decay rate going down, and actually being able to identify the condition before decay has affected these teeth. The most commonly affected tooth is the first adult molar, which is the tooth that erupts at about six years of age. However, there can be effects on primary molars and other teeth within the mouth. 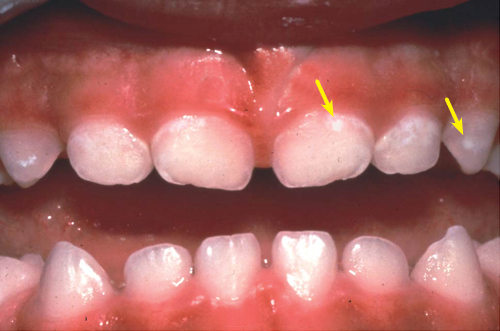 So, take a good look inside your child's mouth, here's the things to watch for; a tooth that is discoloured, white, yellow or brown chalky patches, or a hole may form in the tooth quite quickly after it has come through the gum...but watch out, apparently it can affect the front teeth as well...the permanent incisors may have the same chalky patches on them, but normally the dental decay is not as severe in the front teeth as in the first permanent molars.

We know that early management of these teeth works and early detection can prevent the condition from getting worse...things like fissure sealants to protect the teeth and re-mineralising paste which can help to strengthen the teeth can be used, or things like fillings can be performed rather than requiring more extensive procedures like crowns or extraction.

So, obviously, if you think your child has ‘chalky teeth’, the first thing to do is seek dental advice as soon as possible…fortunately a lot more affordable now that the new government is in place.