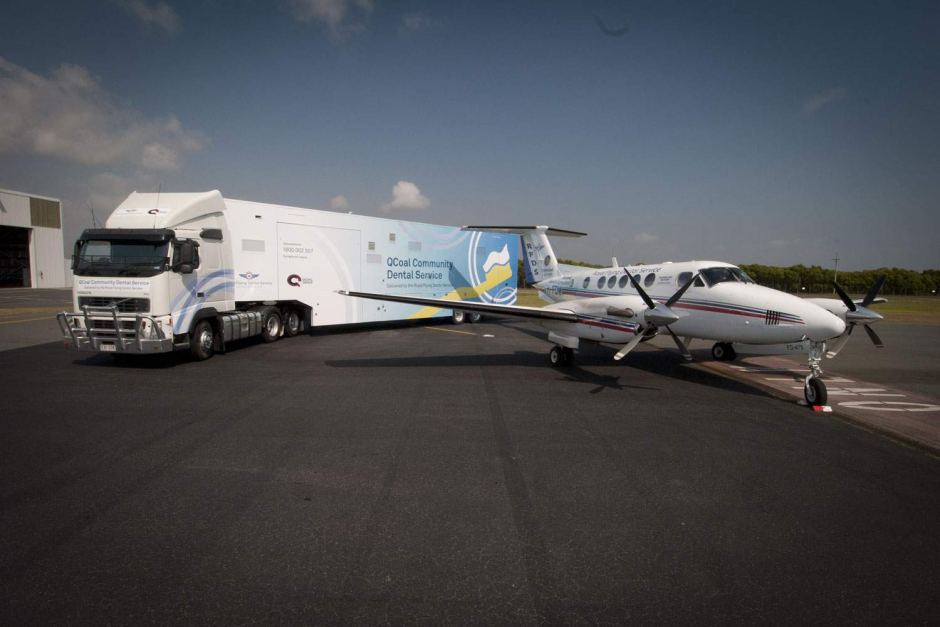 They call it the outback yank and in many rural areas it’s the only dental care available — you have to pull out your own diseased teeth.

A severe shortage of dentists in rural areas means for a staggering number of rural residents a pair of pliers is the closest they can get to dental care.

The Royal Flying Doctors Service, which two years ago began supplying dental care to 10 outback towns off the back of a semi-trailer, says most of the 1800 patients it’s treated so far have been emergency cases.

“There was long term dental disease that had never been treated, fillings, rotting teeth, people had resorted to their own dental work with pliers,” Anita Hansen the general manager of the Royal Flying Doctor Service Queensland said.

Easier to pull out your own rotten teeth

Many rural people have to drive for over and hour and a half to reach a dentist. “If you don’t have any access to dental services and you’ve got a property you can’t leave and it takes three days to get into town you do what you can,” she explains.

In 2004—2006, people living in inner regional areas had the highest average number of decayed missing or filled teeth at 14.75 per person.

The Natonal Rural Health Allaince says the proportion of people with untreated decay varies from 23.5% in major cities to 37.6% in Remote/Very remote areas.

And poor access to fluoridated water in many rural towns means dental problems in the bush are worse.

Bronwyn Christensen whose family farms cattle near the central Queensland town of Theodore says it’s a one and a half-hour drive to the nearest dentist and when the Royal Flying Doctor truck rolled into her town it was fully booked.

There is a dental chair in the town of Biloela that services an area of 12,000 people but there is no dentist.  “The issue is recruitment, trying to get people out of the coast to the inland, it’s the same problem we have attracting doctors,” she says.

Dental care matters because it can affect your general health. More than 63,000 Australians are hospitalised each year for preventable dental conditions, it’s the third highest reason for acute preventable hospital admissions.

Oral cancer is the eighth most common cancer in Australia and dental disease has been linked to heart disease, diabetes, stroke and low birth weight babies.

Chief Investigator, Centre for Research Excellence in Primary Oral Health Care, and an employee of the Universities of Tasmania and Adelaide, Dr Leonard Crocombe, says the main reason there are so few dentists in the bush is they can’t make money.
“You need at least 3,000 patients for a dentist to make money, more than you’d need for a doctor,’ he says.

Even if there are enough patients, low incomes in the bush mean many rural residents can’t afford dental care even if it is on offer.
There are around 400,000 people on waiting lists for government funded public dental clinics around Australia and waiting times are up to five years, most of this care is supplied in major cities, far from the neediest in the bush.

A big increase in the number of overseas trained dentists coming to Australia and an expansion of dental schools from five to nine, many of them in rural areas, has seen a huge increase in dentist numbers to the extent that it is feared there is now an oversupply in the cities.

”The concern is that without targeted policies, we could end up with those who are currently receiving dental care receiving more elaborate dental care, while those who currently can’t access dental care, will still not be able to get it,” Dr Crocombe says.
By establishing dental schools in the bush it’s hoped country people will be attracted to study the profession and stay in their local area but Dr Crocombe says we are still waiting for the evidence to come in.

The Government offers a Dental Relocation and Infrastructure Support Scheme (DRISS) that pays dentists between $15,000 to $120,000 to relocate to rural areas and Infrastructure Grants up to $370,000.  This should help solve the shortage in the bush but Dr Crocombe says his PhD student, Diana Godwin has found dental practitioners who left rural areas wanted better schooling for their kids and employment for their partner.

Long-term retention relied on ensuring the dentist was involved in the community and enjoying the lifestyle.  Fluoridating the water in small rural communities would help combat dental disease in the bush.  Experts want the Health Workforce Australia report which has projections on dentist numbers to be released so workforce planning can be undertaken.

The Children Dental Benefits Schedule which provides $1,000 worth of Medicare funded dental care for kids every two years should be expanded to include adults in the bush.