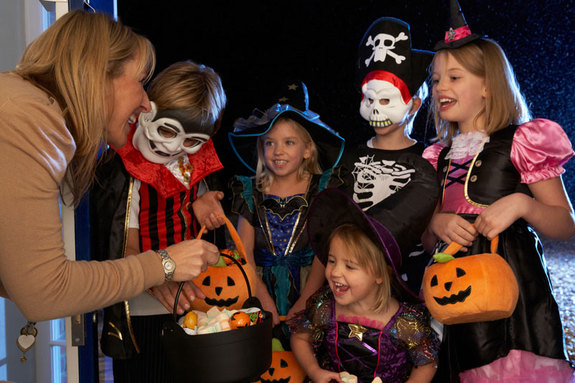 This Halloween, it seems a number of dentists are telling parents that it is okay to let kids gorge themselves on lollies.

There's no reason to be spooked. Dentists aren't hoping to make money on the inevitable windfall of rotting teeth. The fact is, if you're going to eat lollies, gorging is far better for your teeth than rationing.

Slowly snacking on your Halloween treaties every few hours, day after day, keeps your teeth bathed in enamel-corroding acid, the by-product of bacteria feeding on sugar and other carbohydrates in your mouth. This leads to dental caries, or cavities.

For example, as far as oral hygiene goes, it is better to eat five choclate bars at once than to eat one every few hours. In the first scenario, acid will build up in your mouth, but your saliva will naturally neutralise this over the course of an hour or so. And then that acid is gone. In the second scenario, you are constantly exposing your teeth to acid throughout the day, too much for saliva to wash away.

Gorging also is better, because it is more likely to be followed by tooth-brushing. People, and especially children, are less likely to brush their teeth after every lolly eaten, particularly if they aren't at home.

Potato chips are worse...here's why

Lollies are not necessarily the worst thing for your teeth, anyway. The factors that really lead to cavities are stickiness and acidity. Potato chips and pretzels, for example, are worse offenders than chocolate, because these cooked carbohydrates cling to your teeth — giving mouth bacteria something to feast on longer and thus generating more acid.

Although it sounds counterintuitive, substituting chocolate for so-called healthier chips or fruit chews is actually worse for the teeth.

Among the lolly world, the sticky and sour kinds are the worst for your teeth. Those gummies that stay lodged in a molar till Christmas are nothing but trouble. Sour lollies tend to have more acid, so sour-tasting gummies are a double-whammy.

Of course, all this "good news" about lollies only applies to oral health. Aside from the generous 2 percent of the recommended daily allowance of iron in a Kit Kat bar, and 1 percent vitamin A, lollies and choccy bars are of course largely devoid of nutrients and constitutes empty calories. The aforementioned Kit Kat contains more than 200 calories per serving, twice the calories found in a large apple.

Some children are so obese that they suffer from pre-diabetes or even full-fledged type 2 diabetes, which traditionally only has affected adults. These children shouldn't be eating any sweeties AT ALL.

Oral health is nothing to neglect, though. Tooth decay and gum disease are major public health problems, associated with poor digestion, heart attacks, strokes and cancers, stemming from inflammation and subsequent infections.

If you think lollies are the only unhealthy element of Halloween, consider this: Halloween is one of the top three major nights for dangerous binge drinking, along with New Year's Eve and St. Patrick's Day.

On a positive note, 10 beers will wash away even the most stubborn gummies...there's a silver lining to evertything it seems!