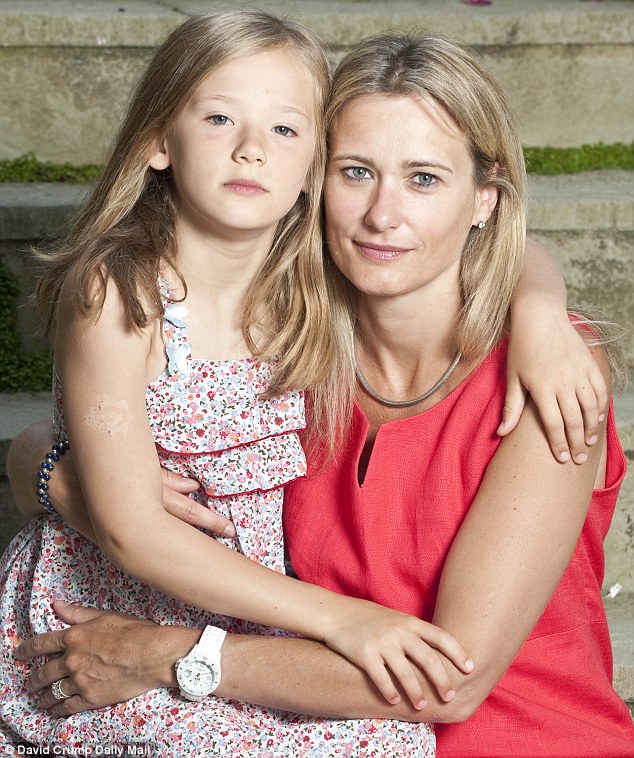 When three-year-old Sophia Lister (pictured here) started complaining that the back of her jaw was hurting, her mother assumed the little girl's adult molars must have started to come through.

'I gave her some pain killers to help her sleep and waited for the pain to go,' says Solveig, 40, who works part-time as a financial director and is married to Chris, 43, an insurance underwriter. But the pain didn't ease, so two days later she took Sophia to the dentist.

'I nearly fainted when he told me that Sophia had serious decay in her baby teeth,' she recalls. 'I hadn't even noticed. I was mortified. She needed root canal work on one of her back teeth and fillings in three more. I kept thinking I must be a terrible mother to have let this happen.'

But Solveig isn't the only middle-class mum horrified to discover her young child has severe tooth decay - a condition more commonly associated with children living in poverty.

According to new figures, almost 26,000 children aged between five and nine have been hospitalised for multiple tooth extractions in 2013-14 - that's the equivalent of almost 500 a week.

Removal of rotten teeth is now the primary reason children in this age group are admitted to hospital. In some cases, dentists have no choice but to remove all 20 baby teeth from their young patients.

And those from comfortable lifestyles are at just as much risk as youngsters from disadvantaged backgrounds - with middle-class parents feeding their children so-called 'healthy' snacks that cause more damage than junk foods, and working mums often too busy to take their children for check-ups.

The legacy can be far more serious than just a phobia of going to the dentist.

'The best predictor of adult tooth decay is dental health at the age of five,' says Dr Mervyn Druian, a dentist who specialises in cosmetic dentistry and reconstruction. 'It's not something that disappears when your baby teeth fall out.'

Many so-called healthy snacks are packed with sugar...

Dentists have seen a steady increase in the number of children needing extensive dental work to save baby teeth, according to industry professionals, part of the problem is that parents think they are giving children 'healthy' foods and drinks, but it is these that can cause the most damage.

Parents don't realise that fruit juices contain more sugar than cola, and many so-called healthy snacks are packed with sugar, too.

It's a trap that Solveig admits she fell into with Sophia, who is now five. While she never let her little girl have sweets, she was happy to let her have apple juice in a sippy cup.

Cavities are caused by two factors:

Although enamel on baby teeth is as hard as enamel on adult teeth, the layer is thinner, making children's teeth more vulnerable.
Sippy cups containing juice are a short cut to dental decay. Sipping on apple juice all day bathes your teeth in acid soup and it's doubly damaging because it's both sugary and acidic.

Current advice is that a child should see a dentist at least once a year, but it seems most parents believe baby teeth don't really matter and regular check ups can wait until their adult teeth emerge...WRONG!

When I told the dentist I fed my son raisins, he told me I might as well be feeding him sugar cubes....

Then there are the dried fruit snacks - raisins, mango, apricots and the like - beloved by middle-class mums as a 'healthy' alternative to biscuits and crisps, but these foods are concentrated forms of fructose, or fruit sugar, which reacts with bacteria in the mouth to create acid.  They are sticky and cling to the space between the teeth, sometimes for an hour or more, all the time causing potential damage.

Scarily, many 'healthy' savoury snacks, such as breadsticks, wholemeal bread and bagels, also contain hidden sugar.  And if a type of bacteria that leads to cavities gets a foothold in childhood, it can ruin a child's smile for life....

But its not just the snacks themselves but the snacking habit that is dangerous.  As life gets busier, we seem to have gone from three square meals a day to six or seven snacks, which I am sure we can all relate to when we're on the go. This means that teeth are constantly bathed in acid - giving no time for saliva to neutralise it and let the enamel recover.

OH NO! - even milk is another culprit. While many parents assume cow's milk is a wholesome drink, it too contains a type of sugar: lactose. Formula milks for children aged from one year upwards also contain added sugar.  Decay is a particular problem if the milk is in contact with the teeth for extended periods.  There is even a condition called 'bottle cavities' which develops because a child is left to constantly suck on a bottle of milk (usually to stop them crying).

There is an overlap period between the ages of five and nine when baby teeth and adult teeth exist in the mouth together, so bacteria from decaying baby teeth will get to work on the adult teeth, too.

So what can parents do to stop their children developing cavities at such a young age?